The academy is not paradise. But learning is a place where paradise can be created. The classroom with all its limitations remains a location of possibility. In that field of possibility we have the opportunity to labour for freedom, to demand of ourselves and our comrades, an openness of mind and heart that allows us to face reality even as we collectively imagine ways to move beyond boundaries, to transgress. This is education as the practice of freedom. (hooks 1994: 207)​

Today we looked at:

We identified some of the communities we belong to: looked at these in terms of latter part of 20th century identity issues:

Then examined which communities we felt we belonged to.  Spoke about notions of imagined communities – like nations – where we have no day-to-day contact with members of the community but share things that make us feel we are a community.  Referenced Benedict Anderson. Considered the notion of Imagined Communities, (Verso 1983)

We thought about the notion of culture and how in the past (and even still) it often referred to Western Civilisation.   Made installations (from the content of our bags) that made some suggestions about our own concerns about cultural identity.  Spoke to them.  Shared them.  Questioned them.

Considered Hofstede’s (1994) suggestion that cultures are classified by four things: their symbols, their rituals, values and heroes.  Looked at what they might mean to us.  Got stuck on heroes. Thinking about where the heroes come from in ‘national’  cultural identity.  Considered the role of ‘old’ heroes in Portugal, people who had gone to prison for their commitment to the Basque country, being Northern.  We touched upon the problematics of ‘heroes’ in terms of being ‘British’ and the implications of Empire – and the very different things it meant to us depending on our own cultural identity.

And Hofstede’s iceberg of culture model.

We decided to read more about Exhibit ‘B’ – as none of us has been able to see it now it has been withdrawn.  To come back and share our thoughts.

Touched on the meanings and implication  of ‘subcultures’, ‘subgroups’ and the notion of ‘the other’ in creating identity.

Decided to read some more of Judith Butler on the ‘performative’ in gender.

We looked at our community.  Room 150.  Within the institution.  And asked: What is this community? What identifies us as a community

Critiqued McMillan and Chavis’ (1986)[2] suggestion community involving something that goes beyond a feeling of relatedness to encompassing the capacity to effect change. We considered their four elements:

Dwelt on the concept of influence.  Making a difference.  Can we make influence change through participatory arts practice?

We took part in some of these activities as part of our investigations.

Millstone Grit: a contribution to the cultural identity debate. 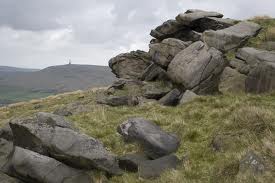 Seeping into the blood

Here is no warm embrace

Only an aching distance.

And yet, its thin,

On its rough edges.

From its unyielding skies.