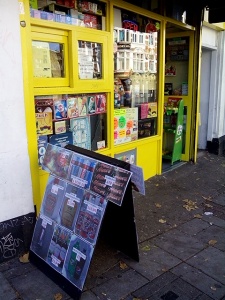 Today we started with four quotes:

Creativity is then not only about innate abilities in isolation from everything else; rather, it is a matter of knowing how to play the game in the field of creativity. It is also about being culturally and socially literate Bourdieu, 1993.

Every day is full of activities which although not recognised as art share the same ‘symbolic creativity’ as art practices. Signs, symbols, rituals, storytelling. Paul Willis 1990 Common Culture.

Every human society has its own shape, purposes, meanings… (and) … expresses these in institutions, arts and learning… A culture has two aspects: the known meanings and directions which its members are trained to; the new observations and meanings which are offered and tested’. Culture is Ordinary Raymond Williams 1958

And discussed their implications for our own work in creative and cultural learning contexts.

We looked Willis’ notions of grounded aesthetics/symbolic creativity.  And decided to search for examples.

We went into the streets around Goldsmiths. Looking for examples of creativity and culture that we could ‘bring back’ and discuss.  We took mobile phones, cameras, pencils, paper to help us capture them.  We looked for surprises, for examples within different cultural contexts, .

We presented and shared these. Looked at what we imagined might have been the drivers for each of thee moments.  Spoke a lot about Bourdieu’s concept of ‘cultural and socially literacy’.  And questioned our role, and possible responsibilities, as socially engaged artists in bringing about both with our participants.  We examined the notion of ‘need’ within our projects.  Whose need?  Especially in projects that are driven by funders.  We touched on projects that had totally got it wrong with the participants.  Explored our role as ‘outsiders’.

We looked at some of the projects of the Museum of Non-Participation. http://www.museumofnonparticipation.org/

In particular the participatory readings the artists organised of Brecht’s The Exception and the Rule – and his insistence that we exam everything – even when it seems ‘normal’.

Being half term a number of our ‘children’ joined us.  They solved IT issues for us, joined in the discussion, made their own art.  Played.  Contextualised everything.